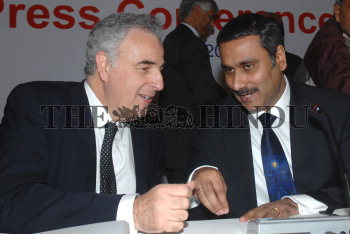 Caption : NEW DELHI, 20/12/2007:Executive Director, Global Fund to Fight AIDS , Tuberculosis and Malaria, Dr. Michel Kazatchkine along with Union Health Minister, Anbumani Ramadoss at a Press Conference after signing a Grant Agreement worth more than US $ 100 million for the second phase of a programme fighting AIDS in India, in New Delhi on December 20, 2007. This new Grant brings the total approved amount of Global Fund resources to battle the three pandemics in India to US$ 492 million. Photo:S_Subramanium