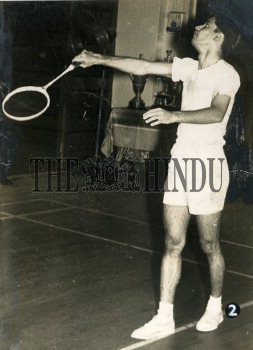 Caption : Nandu Natekar, the National champion, who beat S. L. Jaini in straight games to claim the singles crown in the National Badminton Championship held in Bombay, seen in action. He also annexed the doubles title with R. A. Dongre as his partner. (Circa August 23, 1955). PHOTO: THE HINDU ARCHIVES