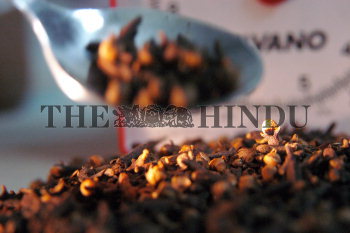 Caption : Clove being weighed at a spices shop in Aluva near Kochi in Kerala. Sharp fall in global clove output is likely to push up prices in the international market. Production in Indonesia, world' s largest clove producer, is estimated at only 10 to 20 per cent of total production. India's requirement stands at 8,000 tonnes to 10,000 tonnes while production stands at 1,000 to 2,000 tonnes , making it a net importer of the commodity.Total import of cloves during April - october 2007-08 stood at 3,610 tonnes valued at Rs 44.33 crore against 2,881 tonne valued at Rs 53.97 crore a year ago. Photo: K_K_Mustafah 20/12/07