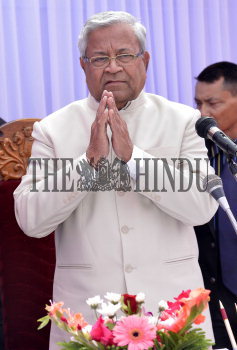 Caption : GUWAHATI, ASSAM, 12/12/2014: Padmanabha Balakrishnan Acharya after administer oath as the new Governor of Assam at Raj Bhawan in Guwahati on December 12, 2014. PB Acharya took over additional charge as Governor of Assam and also acting as the Governor of Nagaland. Photo: Ritu Raj Konwar