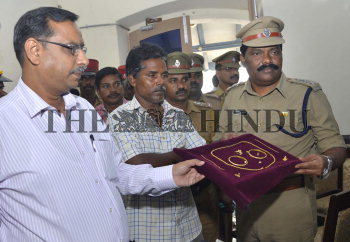 Caption : PUDUCHERRY, 11/12/2014: IG Praveer Ranjan (left) looks at the recovered jewellery and valuables in his office in Puducherry on December 11, 2014. The Police claimed to have solved the murder case of a 48-year-old woman who was strangled to death by unknown person and her jewels stolen in Mudaliarpet a fornight ago. Photo: S.S. Kumar