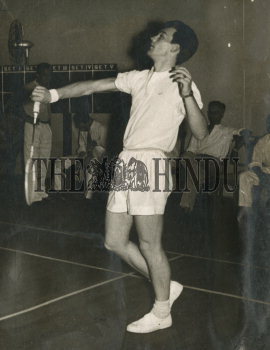 Caption : Kobbero seen in action during his match against Amritlal Dewan (not in picture), before whom he went down fighting, in the Western India Badminton Championship held in Bombay. (circa October 04, 1957). (Published in Sport and Pastime on October 19, 1957). PHOTO: THE HINDU ARCHIVES