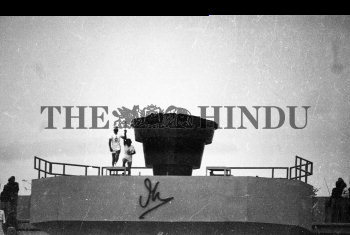 Caption : Balbir Singh, Indian hockey team captain at the 1956 Melbourne Olympic Games, and Diana Simes, the former Karnataka star athlete seen near the cauldron with the torch before lighting the flame during the opening ceremony of the IX Asian Games at the Jawaharlal Nehru Stadium in New Delhi on November 19, 1982. PHOTO: THE HINDU ARCHIVES