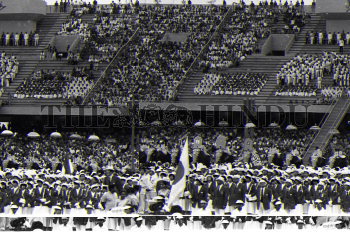 Caption : Caparisoned elephants stand majestically with the Asian Games flame in background (partly seen) at the inauguration of the IX Asian Games at the Jawaharlal Nehru Stadium, New Delhi, on November 19, 1982. Contingents of some of the participating countries are also seen. PHOTO: THE HINDU ARCHIVES