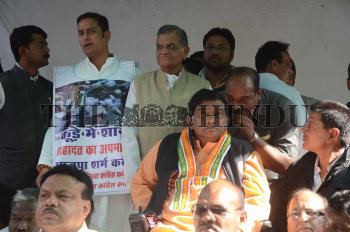 Caption : NEW DELHI, 10/12/2014: Congress leader Ajit Jogi and other Congress workers from Chhattisgarh staging a protest against the Naxals attack on CRPF personnel and demanding the increse rates of paddy in the State, at Jantar Mantar, in New Delhi on December 10, 2014. Photo: Sushil Kumar Verma