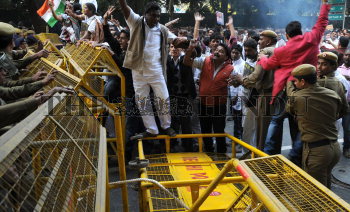 PROTEST BY CONGRESS WORKERS AND LEADERS FROM CHHAT

Caption : NEW DELHI, 09/12/2014: Congress workers and leaders from Chhatisgarh demonstrate near Prime Minister's residence in New Delhi on Tuesday, December 09, 2014, demanding the ruling BJP government in the State to step down immediately and own responsibility for the death of 10 women, who went through mass sterilization procedure earlier this month. Ten women died and 14 were in a serious condition after botched operations at a government mass sterilization "camp" in Bilaspur district. Four officials were suspended and an investigation started revealed that the death happened due to contamination of the medicine used with POISON used for killing rodents. Photo: Shanker Chakravarty