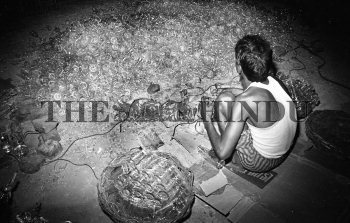 Caption : Child labourers work at a glass factory in Ferozabad town of Uttar Pradesh, despite a Government ban on employing them in hazardous industries. According to Government estimates, around 18 million children work instead of going to schools but child rights activists estimate that there are about 55 million children working in hazardous industries such as bangle-making, matchmaking, quarrying, tanning and firework manufacturing. Picture taken on September 25, 1993.