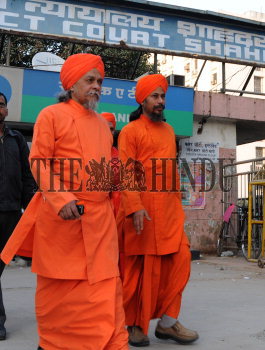 Caption : NEW DELHI, 08/12/2014: Ranjan Dwivedi's Ananda marga supporters at Karkarduma Court after hearing of case of L.N. Mishra, former Minister of Railways, who was killed in a bomb blast taking place during a function on the platform of Samastipur Railway Station in 1975. in New Delhi on Monday, December 08, 2014. Photo: Shanker Chakravarty