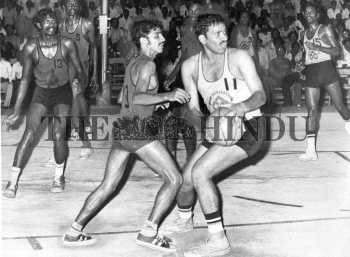 Caption : ICF Vs Indian Overseas Bank (IOB) match in progress at Madras on August 12, 1979. Ramachandra Prabhu of IOB seen in action against Rajmohan (10) of ICF. ICF not only won the Magnolia Trophy of the Ace Basketball Club but also restrained the formidable IOB team, which had made every tournament it entered its won for the last six years. (Published in The Hindu on August 18, 1979). PHOTO: THE HINDU ARCHIVES