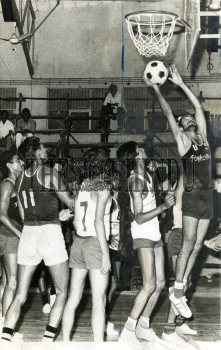 Caption : Rajasthan's PARAMJIT SINGH goes high in the air to take a shot as Poona's Hiremath watches the action in the semi-final of the All-India Inter-University Basketball Championship at the University Union Indoor Stadium in Madras on December 04, 1975. (Published in The Hindu on December 05, 1975). PHOTO: THE HINDU ARCHIVES