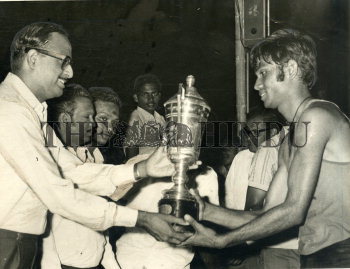 Caption : G. Srinivasa Ramanan, Superintendent of Police, Madurai Urban, giving away the VSM Rajaramier Cup to Syed Arid, captain of the ABT Parcel Service Sports and RECREATION Club, which won the All-India Basketball tournament conducted by the Gymkhana Club at Madurai on September 20, 1972. (Published in The Hindu on September 23, 1972) PHOTO: THE HINDU ARCHIVES