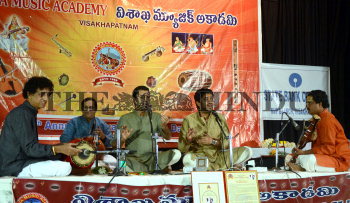 Caption : VISAKHAPATNAM, ANDHRA PRADESH, 29-11-2014: Carnatic classical music exponents Trichur Brothers Sri Krishnamohan and Ram Kumar Mohan giving a Vocal concert after they were conferred with Nedunuri Krishnamurthi Puraskar of the Visakha Music Academy at the 45th Annual Festival of Music and Dance of the Academy at Kalabharati in Viskahapatnam on Saturday, November 29, 2014. They were accompanied by their father Trichur R. Mohan on Mrudangam, M. Satyanarayana Sarma on Vilon,and S.Hanumantharao on Ghatam. Photo: C.V. Subrahmanyam