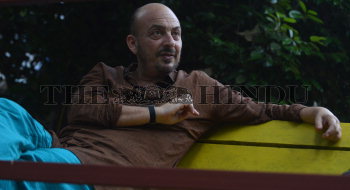 Caption : KOCHI, KERALA, 29/11/2014: Italian screenwriter and film director Emanuele Crialese during an interaction with The Hindu Metro Plus in Kalady on November 29, 2014. Photo: Thulasi Kakkat