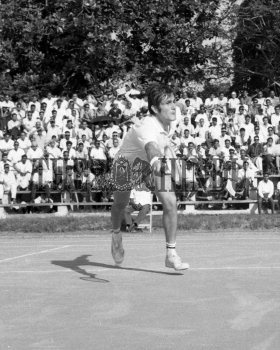 Caption : Nastase of Rumania stretching across for a forehand volley in the men's singles final of the National Hard Court Tennis Championship against P. Lall of India (not in picture) at the Egmore Stadium in Madras on January 05, 1969. PHOTO: THE HINDU ARCHIVES