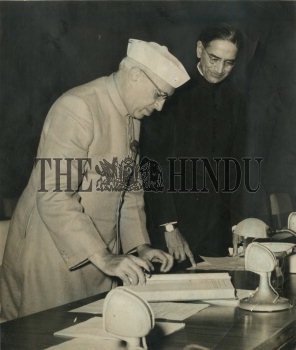 Caption : Prof. P. C. Mahalanobis, President of the National Institute of Sciences of India, admitting Mr. Nehru as a Fellow of the Institute, at its general meeting held in Delhi on Tuesday, January 20, 1959. (Published in The Hindu dated 22/01/1959) PHOTO: THE HINDU ARCHIVES