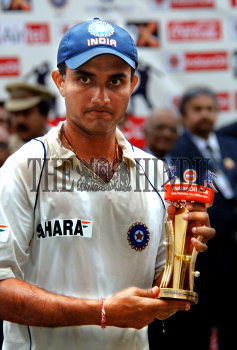 Caption : BANGALORE, 12/12/2007: Indian cricketer Sourav Ganguly poses with the Man of the Series trophy awarded for his performance in the Indian Oil Cup three-Test series against Pakistan, at the Chinnaswamy Stadium in Bangalore on December 12, 2007. India beat Pakistan by 1-0. Photo: K.R. Deepak