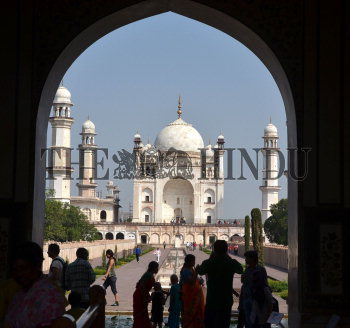 Caption : KHAMMAM, TELANGANA, 14/11/2014: A family members posing in front of the Mini-Taj Mahal at Aurangabadin Maharashtra state. Bibi Ka Maqbara is situated about 5 kms from the Aurangabad city, the burial place of Aurangzeb wife, Rabia-Durrani. Aurangzeb’s son built this monument in 1679 AD in memory of his mother Rabia-Durrani. It is an imitation of the Taj Mahal (among 7 new wonders of world) at Agra, it is also called as "poor mans Taj Mahal" owing to it being a poor replica of the Taj. Behind the tomb is located a small archeological museum. The COMPARISON with the Agra monument has unfortunately somewhat degraded the Aurangabad tomb which in itself displays a worthwhile architectural design, with much distinguished surface ornamentation in the late Mughal style. Photo: GN. Rao.