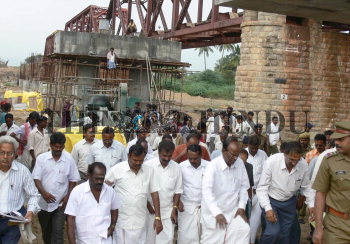 Caption : TIRUVANNAMALAI, 15/12/2007: Union Minister of State for Railways R. Velu (third from right) inspecting the work on a railway bridge across the Cheyyar river at Karayambadi village near Kalasapakkam in TIRUVANNAMALAI district on December 15, 2007. The iron bridge on the right is the old one which has now been abandoned. Photo: D. Gopalakrishnan