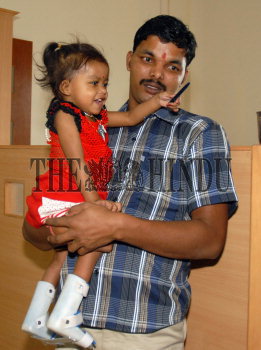 Caption : BANGALORE, 15/12/2007: Lakshmi Tatma, two year old from Bihar, who was separated from her conjoined parasitic twin had eight limbs and underwent a 27 hour surgery, conducted by doctors at Sparsh Hospital in Bangalore on November 06, was discharged on December 15, 2007 and left for Jodhpur in the evening with her parents after a farewell given by the hospital staff. She is seen in a playful mood with her father Shambu. Photo: K. Gopinathan