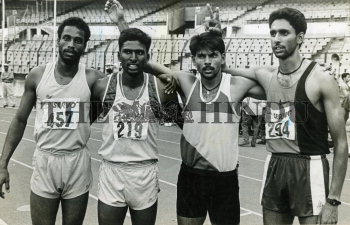 Caption : The India A team of (from left) Ramachandran, Lijo David Thottan, Jata Shankar and Paramjit Singh, who created a new national record in the 4x400m relay on the final day of the Indian Oil-Servo Federation Cup Athletics Championship held at Nehru Stadium in Chennai on July 03, 1998. (Published in The Hindu on July 04 1998). PHOTO: THE HINDU ARCHIVES