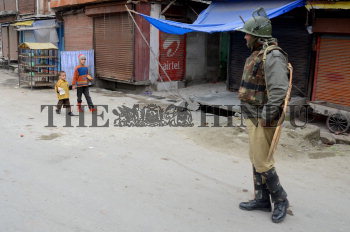 Caption : SRINAGAR, JAMMU AND KASHMIR, 05/11/2014: Children walk as security personnel at a temporary check point during curfew in old city Srinagar on November 05, 2014. Parts of the city were under curfew after two civilians belonging to Nowgam district were killed and two other injured when Army opened fire on the vehicle they were travelling at Chatergam in BUDGAM district on Monday. Photo: Nissar Ahmad