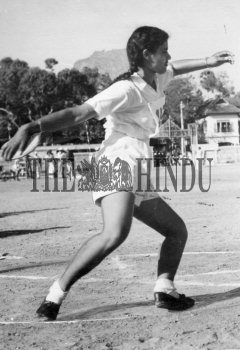 Caption : Manmohini Oberoi, of Madras, who scored a surprise victory in the women's discus throw event at the National Athletic Championship held at Trivandrum on February 15, 1959. (Published in The Hindu on February 16, 1959). PHOTO: THE HINDU ARCHIVES