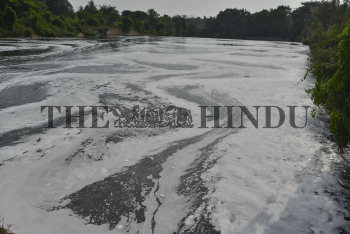 Caption : BANGALORE, KARNATAKA, 31/10/2014: Water gushing out of Vrishabhavathi reservoir (Byramangala lake) at Bidadi in Ramanagara district. Vrishabhavathi river, a tributary of Arkavathy River, the erstwhile fresh water stream, today carry huge quantities of industrial, agricultural and domestic effluents from the western and southern part of Bangalore metropolis. On the Bangalore-Mysore Road, the Vrishabhavathi canal on the outskirts of Bangalore is a familiar sight. There is also a water treatment plant that was set up at a great cost just before Kengeri, in Bangalore. Photo: K. Murali Kumar