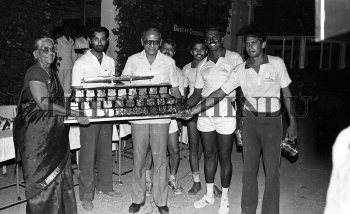 Caption : The Best and Crompton 'A' team which won the fours event in the Merchants and Bankers regatta receiving the Challenge Fours Trophy in Madras on April 20, 1986. The members of the Best and Crompton 'A' team are PI. Chokkalingam, A.S. Rajan, Stephen Michael, M.R. Ravindran (coach), Farid Hussain and B. Sundaresan. Mr. A.M.M. Arunachalam, Chairman, Tl Group, presided and Mrs. Lakshmi Arunachalam gave away the prizes. PHOTO: THE HINDU ARCHIVES