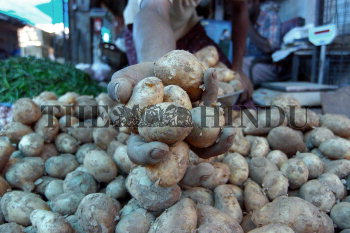 Caption : Potato sales in progress in Kochi vegetable market, Kerala. Indian POTATOES are produced at low production cost and is free from prohibited diseases like wart, black scruf and pests like tuber moth and nematodes ( a barometer for phytosanitary standards) which provides it a competitive edge in the international market. The country, with an annual potato production of 24 million tonnes, contributes about 8 per cent to the total world potato production. India's share in world's potato export is 0.52 per cent and ranks third in production after China and Russia. Photo: K_K_Mustafah 12/12/07