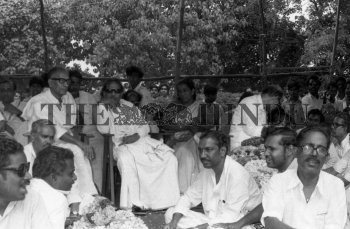 Caption : D.M.K. and other opposition parties in Tamil Nadu observed a day-long token fast against the ruling party's violent METHODS and the Government's anti-labour policy. A number of legislators and workers belonging to these parties joined the fast undertaken from 8 a.m. to 6 p.m. They were seated in a shamina erected near the "Triumph of Labour" statue on the Marina, opposite the Ezhilagam office complex on July 07, 1979. Mr. M. Karunanidhi was among the leaders who observed the fast in Madras. The others were Mr. M. Kalayanasundaram (CPI), Mr. V.P.Chintan (CPI-M), Mr. Abdus Samad (ML), Mrs. Ramani Bai and Mr. K. S. Narayanan (Janata), Mr. M. Muthuswami (Congress), Mr. Thirumarvan (FB), Mr. Karunanandham (Republican Party) Mr. N.V.N. Somu and Mr. T.R. Balu. PHOTO: THE HINDU ARHCIVES