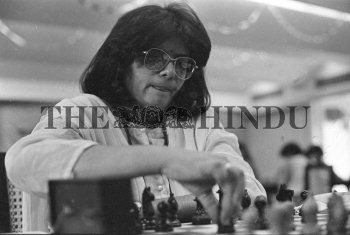 Caption : Maharashtra's Bhagyashree Thipsay about to make a move in the game against Kiran Agrawal of Madhya Pradesh in the National Women's chess championship at House of Soviet Culture in Bombay on January 08, 1992. PHOTO: THE HINDU ARCHIVES