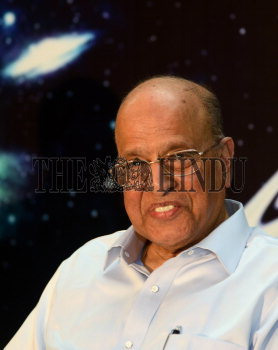 Caption : BANGALORE, KARNATAKA, 20/10/2014: Former Chairman of ISRO and former Member of Planning Commission, K. Kasturirangan at the Satish Dhawan commemorative lecture on 'Origins and early evolution of Indian space endeavour - a tale of two chairmen' organised by the Institution of Engineers (India) in Bangalore on October 20, 2014. Photo: K. Bhagya Prakash