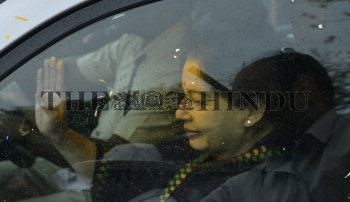 Caption : BANGALORE, KARNATAKA, 18/10/2014: Former Tamil Nadu Chief Minister Jayalalithaa on her way to HAL airport, from where she left on a special flight to Chennai, after being released from Parapanna Agrahara prison in Bangalore on October 18, 2014, following completion of formalities, after the Supreme Court granted her bail in the disproportionate assets case on October 17. Photo: K. Murali Kumar