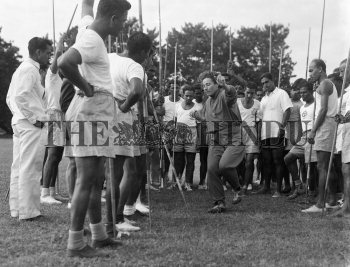 Caption : Dana Zatopek, the Olympic javelin champion who came to Madras along with her husband Emil Zatopek on a coaching assignment, demonstrates the technique of javelin throwing, at the YMCA in Madras. (December 23, 1955). PHOTO: THE HINDU ARCHIVES