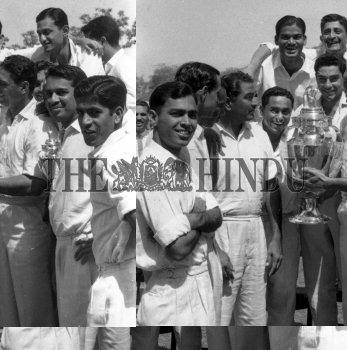 Caption : The victorious Bombay cricket team celebrates with the Ranji Trophy at Jaipur on March 13, 1963. Bombay beat Rajasthan by an innings and 19 runs in the final of the National cricket championship for the Ranji Trophy at Maharaja College grounds in Jaipur. Captain P.R. Umrigar is seen holding the trophy. PHOTO: THE HINDU ARCHIVES