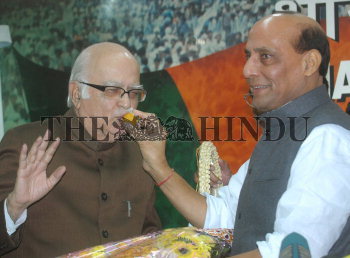 Caption : NEW DELHI, 10/12/2007: L K Advani being being offered sweets by BJP President Rajnath Singh after he was elected as thier Prime Ministerial candidate for the forthcoming Lok Sabha elction in the BJP Parliamentary Board meeting in New Delhi, on December 10, 2007. Photo: V.V. Krishnan