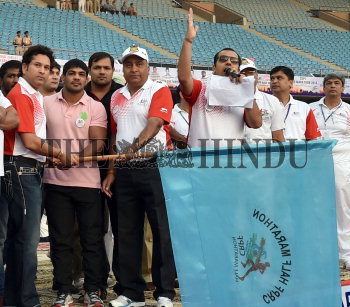 Caption : NEW DELHI, 12/10/2014: Cricket player Sachin Tendulkar with CRPF DG Dilip Trivedi and Wrestler Sushil kumar flag off the 'CRPF Half Marathon Run for Unity’ to promote nationalism and further the cause of ‘Unity and Solidarity’, organised by CRPF at Jawaharlal Nehru Stadium in New Delhi on October 12, 2014. Photo: Shiv Kumar Pushpakar.