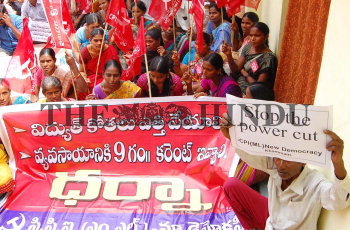 Caption : KHAMMAM, TELANGANA,10/10/2014, CPI ML New Democracy staging a dharna in front of SE office in Khammam on Friday, October 10, 2014 against “erratic” POWER supply. Addressing the dharna, District Secretary Potu Ranga Rao alleged that the TRS government’s failure to provide assured consistent POWER supply to the agricultural sector was taking a heavy toll on the kharif prospects of the farmers in the district. Photo: GN. Rao