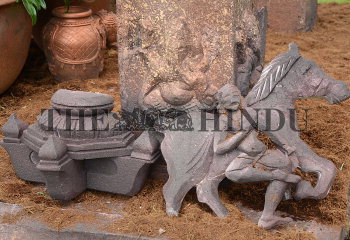 Caption : BANGALORE, KARNATAKA, 10/10/2014: The ruins of Hampi are seen on the background at the three-day Nursery Mela organised by the Nurserymen Co-operative Sicuety as part of its 50th anniversary celebrations, in Lalbagh on October 10, 2014. Photo: K. Bhagya Prakash