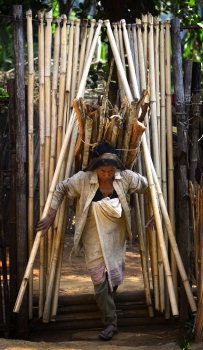 Caption : KARBI ANGLONG, 09/10/2014: A Tiwa tribal woman carrying firewood and enters through the “Langara” (the entrance gate) of a traditional Tiwa house in Tharakunji village in Karbi Anglong district of Assam on October 09, 2014. “Langara” is made out of bamboo and is used by every Tiwa house hold. Its works like an indigenous calling bell once someone enters through the Langara it makes a sound and the house owner comes to know that someone has come. Tiwa is one of the major tribe of Assam inhabited in the Karbi Anglong and Morigaon districts of Assam state. Traditionally, the community is expert in use of bamboo which is grown abundantly in the hills. The Tiwa womenfolk are good weavers. Photo: Ritu Raj Konwar