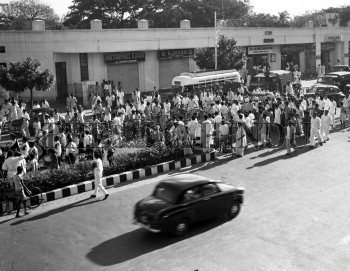 Caption : GRAND RECEPTION FOR OLYMPIC XI: A heroes welcome was accorded to the members of the victorious Indian Olympic hockey team on their way to the Stadium and inside where they played an exhibition game against a South Zone XI in Madras on December 22, 1956. For the first time in the history of sport in Madras the Olympians were taken in procession in open cars along Mound Road, starting from the Arts College. PHOTO: THE HINDU ARCHIVES