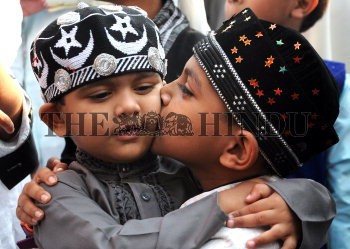 Caption : Muslim children greet each other by kissing after offering prayers at Bandra in Mumbai on October 6, 2014, on the occasion of Eid al-Adha (also known as Eid al-Azha or Eid ul-Zuha or Bakraid), the festival of sacrifice. The festival commemorates the belief of Muslims that Prophet Ibrahim had offered to sacrifice his son at the behest of Allah to test his faith, but, at the last moment, Allah commanded Ibrahim to sacrifice a sheep instead, since he had passed the test of faith. Photo: Shashi Ashiwal