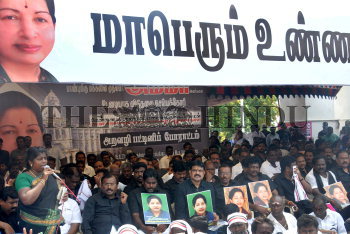 Caption : CHENNAI, TAMIL NADU, 05/10/2014: All for their leader: Chennai Corporation Mayor SAIDAI DURAISAMY (left), Corporation AIADMK Councillors and cadres sit- on a fast during a protest at MGR memorial in Chennai on October 05, 2014 to show their protest against party supremo and former Chief Minister Jayalalithaa was sentenced to four years in jail on September 27, 2014 in a disproportionate assets case. Photo: B. Jothi Ramalingam