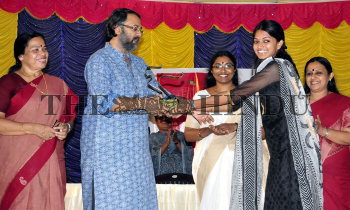 Caption : THIRUVANANTHAPURAM, KERALA, 30/09/2014: Actor- Director Madhupal presenting the P.K. Rosy award for the best film "What Next" to its Director Merlyn Babu during the valedictory of the 4th Female film Festival in Thiruvananthapuram on September 30, 2014. From left: P.K. Sreemathy MP, P.S. Sreekala, and T.N. Seema, MP look on. Photo: S. Mahinsha