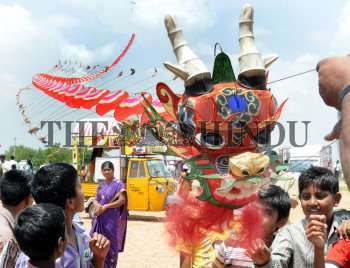 Caption : MYSORE, KARNATAKA, 30/09/2014: The dragon kite was one of the attractions on the first day of the three-day Dasara Kite Festival at the Lalitha Mahal Helipad grounds in Mysore on September 30, 2014. Photo: M.A. Sriram