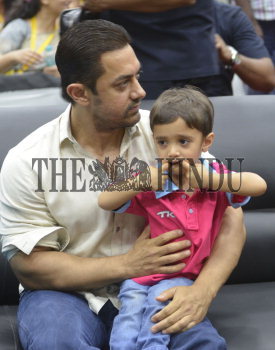 Caption : BHOPAL, MADHYA PRADESH, 29/09/2014: Bollywood Star Aamir Khan with his son Azad Rao Khan during the 'Round Square International Conference 2014' at Sanskaar Valley School in Bhopal on September 29, 2014. Students, including Delegates from 22 countries, belonging to five continents which are members of Round Square, take part in the Conference. Photo: A. M. Faruqui