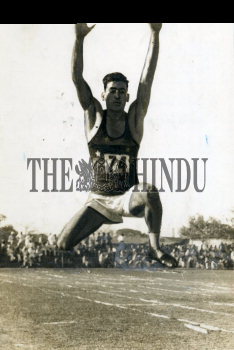 Caption : National record that was bettered was in long jump event which was won by Bag Singh of Southern Command. He cleared 23 ft. 3½ inc. bettering the previous record of 22 ft. 10½ inc. during the All India Services Athletic Championship held at Calcutta. (Published in Sport And Pastime on February 19, 1955). PHOTO: THE HINDU ARCHIVES