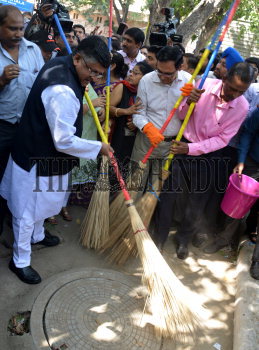 Caption : NEW DELHI, 26/09/2014: Minister for Communication and IT and Law, Ravi Shankar Prasad, cleaning the premises with a broom during the launch of cleanliness drive in the campus of Ministry of Law and Justice to mark the commencement of Swachh Bharat Mission announced by the Prime Minister, in New Delhi on Friday, September 26, 2014. Photo: R.V. Moorthy