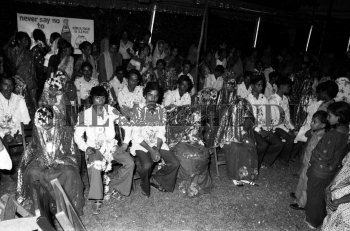 Caption : A Muslim mass marriage ceremony in progress at Hotel Imperial, Egmore in Madras on April 06, 1979. All the 31 Muslim brides gave their individual consent. The 'Nikkah' was then celebrated and the Islamic Cultural Society had brought together 31 couples. As an annual feature of the birthday celebrations of the Prophet Muhammed, the Society conducts mass-marriage for orphan and poor Muslims. PHOTO: THE HINDU ARCHIVES