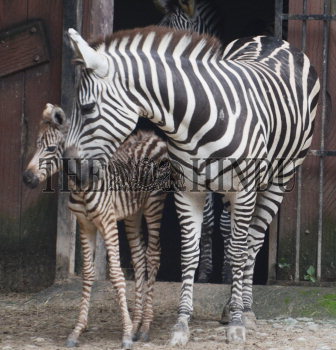 A GIFT TO KOLKATA ZOO

Caption : KOLKATA, WEST BENGAL, 24/09/2014: A gift to Kolkata Zoo on its 140 foundation day- A female baby Zebra was born in the Kolkata Alipur Zoological Garden in the early hours of September 24, 2014. With this the umber of Zebras in the Zoo increased to six. Last year another Female Zebra was born at the Zoo after nearly 60 years. Zoo director K L Ghosh said that with two successive births in two years the captive breeding programme is working well. The Zoo has two male, two female and two female baby Zebras. Zebras are not indigenous to India they are found in Africa. Photo: Sushanta Patranabish